As generations pass on, they leave behind a legacy – achievements get recounted; values are cherished; physical assets are distributed and used. However, what often gets lost to future generations are the stories and memories of all those things that help families evolve. These include, snippets of how life used to be, the history behind family traditions, and insights to the many personalities that shaped families. Many, whose influence can still be seen, but tend to will fade away with each successive generation unless an effort is made to record and preserve them.

Many older people love to slip back in to the past. I remember how my grandmother would throw little anecdotes our way about her life. About how she got married at the tender age of 15, then travelled to Sri Lanka by ship – a journey that took over a month – and was introduced to a large, boisterous family. She told me about the cows in the backyard that gave fresh milk each day and the veralu, guava and jambu trees from which her younger brothers-in-law plucked fruit.  How many little children of the time, went to school in rickshaws drawn by men, and you could count the number of cars that passed her house each day on your fingers. She painted verbal pictures of grand family dinners and outings. Each of these events needed a great deal of planning and preparation, and whilst they drew everyone together, they also sent many into despair. I have tried passing on these stories to my children but they never seem quite the same. I know I miss many of the finer details that would make her stories come alive and wish she were here to tell them.

Today we have at our disposal many tools that can help us preserve our histories. A compilation of photographs, home videos, letters and diary entries can provide a glimpse into a person’s life. But only when we can combine these with interviews of the primary source, the elders in our family, do we get the true essence of these stories. The gaps get filled in and the picture becomes complete. “A Wonderful Life Productions” is a company in the US that does exactly this. They chronicle people’s life stories through interviews, conversations and memorabilia (we have included a link below to a You Tube video that showcases some of their work). You, cannot access their services here in Sri Lanka, but even a home production, though less professional, could be just as priceless for generations to come. So the next time you are having chat with the elders in your family about their past, record the conversations. Those little tit bits will be gems for future generations. 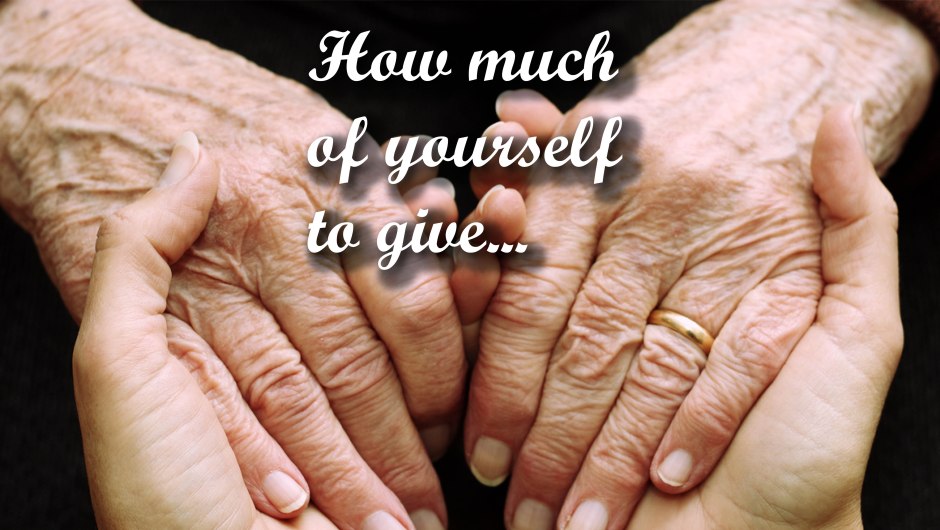 For care givers often the quandary is ‘How much of myself do I give?’ As loved ones get less capable and more dependent physically and emotionally, the burden of looking after an older person can get more and more wearisome even for the most committed caregiver.

Let’s take the example of Anoma, a mother of two with an aging father in her care. After the loss of her mother, her father seemed to withdraw from the world. He stopped meeting up with friends and, as his faculties deteriorated he lost interest in most activities. In a bid to force her father out of his shell, Anoma began to include him in as many of her social engagements as possible and took over many of his responsibilities. What she found was that soon her father began to depend entirely on her and her family for most of his physical, social and emotional needs. Moreover, her father became less forgiving when the support was not available. If she was ill or busy with her kids, he would get snappy and irritable. Anoma found herself torn between despair, love, guilt and anger.

Anoma’s dilemma has been echoed on several caregiver posts and blogs and the consensus is that setting boundaries early on makes the relationship between the caregiver and the elder healthier and stronger. Saying ‘no’ is not easy and can break one’s heart, but setting certain rules and gently, though firmly ensuring that those rules are not broken gives caregivers the time and space they need to look after their own needs. This will help bolster the resources and energy caregivers need to provide better long term care.

However, where does one start if the caregiver is already in a relationship where the elder in their care is used to having them on call at all times. It starts first with carefully thinking out the boundaries that would work for both parties. The next step would be for the caregiver to have a conversation with their elderly loved one about where they stand while clearly conveying the new boundaries that they feel would work. What would help is, keeping the explanation simple and clear so that it doesn’t become a protracted negotiation. The caregiver needs to make it clear that while they may be less involved on certain instances, viable alternatives have been thought out such that the person being cared for is always looked after.  The alternatives could even be encouraging the elder person to be more independent. Finally, the caregiver must clearly communicate that their loved one is not being abandoned. On the contrary this change will help create a stronger, and more enjoyable and pleasant relationship between the caregiver and the elderly.

Conveying the new rules is the easier part, implementing the same may prove to be a bigger challenge. There could be a constant pull at the heartstrings and play on your guilt, but the caregiver has to be consistent. Every concession that is made will make the elder in their care take the new rules less seriously. Caregivers need to show their elders that while their concern and love has not reduced, the rules will not be bent. Eventually things will start getting easier. Caregivers can improve the moments spent with their loved one with more conversations, sharing of interests, and trips down memory lane. Eventually as the new rules come to be accepted, caregivers will discover a new found pleasure in their relationships with their elders.

All the contents (text and photos) of this blog are the property of The Senior Station. Please refrain from copying and material from this blog without recognition to the author and link to the source on www.theseniorstation.com
Loading Comments...